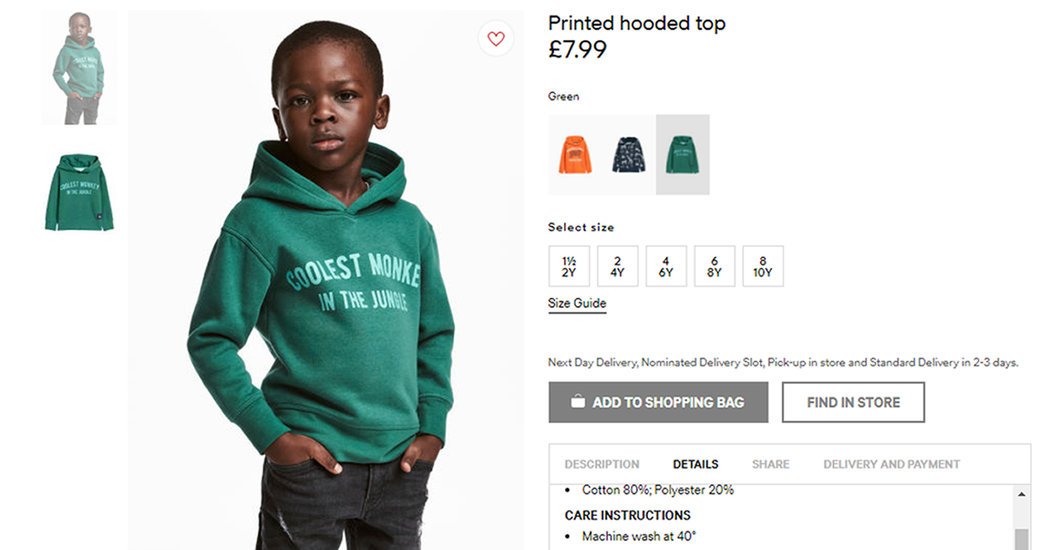 For Showing Black Child Wearing A ‘Monkey In The Jungle’ Sweatshirt, H&M Apologizes

H&M, for an online advertisement showing a young black boy wearing a hoodie of H&M with “Coolest Monkey In Jungle” written on it    seeks an apology for doing so.

In Britain, the image was advertised on the retail clothing company’s website, which led to a lot of disturbance on the social media. Critics said the advertisement was absolutely unacceptable and that it was filled with racism.

We completely understand people must be very upset seeing the advertisement and all of us who work here at H&M can only agree, the company said in a statement. “We deeply apologize for the picture was taken this way and we also apologize for the print on the garment. Not only the product the child is shown wearing has been taken off the shelf but we have removed the image of the child from all our channels”.

“We know that many people are disappointed about the image. We, all the employees of H&M, also agree”. H&M also said, “We are deeply sorry that the picture was taken. Hence, we have not just taken down the image from our channels, but also we have removed that garment the boy is wearing from all our outlets. We have no doubt in saying that there has been negligence from our side. We will investigate so that such mistake is not repeated in future again.”

The angry people took this on twitter saying that there was another sweatshirt worn by a white child and on the sweatshirt, it was written “Survival Expert”.

This is absolutely disgusting that a white child wears a sweater with “Survival Expert” written on it whereas a black child is made to wear “Coolest Monkey In The Jungle”. It projects the neocolonial thinking of H&M. One of the users of Twitter in his tweet said, “you will never see me again In any of your shops.”

Creators of “Legends of Chamberlain Heights,” which is aired on Comedy Central, Josiah Johnson also tweeted criticizing the brand and many other celebrities also did so on their twitter handles.

Music artist Abel Makkonen Tesfaye said, “When I woke up this morning, I was absolutely embarrassed and shocked seeing the photo. He said, “I felt extremely offended and I am not going to work with the brand anymore”.

Charles Blow, the columnist in The New York Times, questioned the brand, “have you lost your freaking mind!!!”

Wendy Liebmann, the retail strategist, said that companies, especially in retail industry, are very conscious that how their brand is being perceived by consumers, what they feel about the products that are offered. As a result, it happens sometimes that a global company is not sensitive about other cultures. It is an everyday issue of not being sensitive towards others feelings. But, there should be a level of consciousness at all times and not only at times when such kinds of incidents happen.